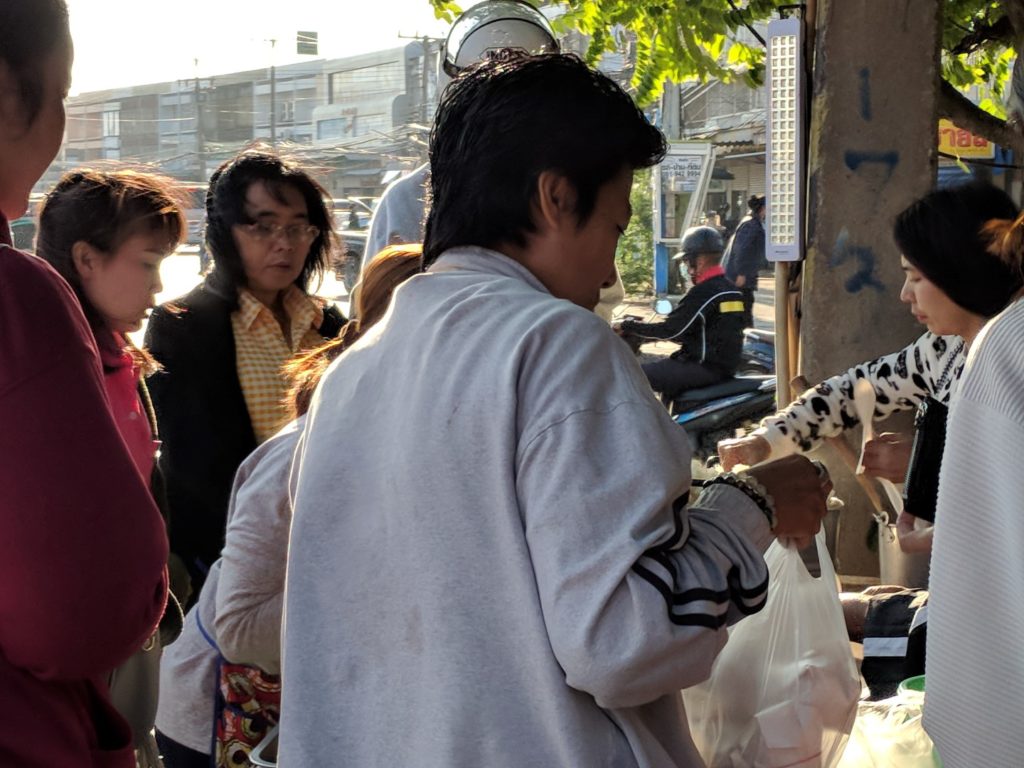 …maybe that’s a little dramatic. But here in Thailand, I use Google Translate a lot. And in that use, I’ve noticed that the longer the sentence, the less accurate the translation. In fact, I frequently find myself summarizing my thoughts down to a single word so I can charade the rest of my idea. Before you get too much farther, I HIGHLY recommend you listen to the audio for this post as I get into some language examples later (yeah…you can hear me *try* to speak Thai!) But I don’t think I understood why this happens until I asked one of my Thai friends what the most difficult part about learning English was:

It’s not vocabulary, or grammar, or sentence structure. The most difficult part is culture. It’s knowing when to use the vocabulary.

And I agree. For example…It’s breakfast time, I’m about to go to class, but before I do, I need to stop by my favorite sticky rice vendor (usually the older lady leaning over the cart in the background) and place my order*.

English: “I want sticky rice.” Google Translate: C̄hạn t̂xngkār k̄ĥāwh̄enīyw How I was taught: P̄hm, aw k̄ĥāwh̄enīyw, khrap Okay…so Google has me making a few infractions: 1) using C̄hạn instead of P̄hm 2) using t̂xng instead of aw 3) dropping the ending khrap

Item 1 is kinda a big deal

In the Thai language, you declare your gender nearly every time you speak. In Thai culture the practice of men crossdressing as ladyboys is also very common. Why mention that now, you ask? Because Google Translate recommended I use the feminine declaration C̄hạn instead of the male declaration P̄hm. Ladyboys switch to C̄hạn because they want to be recognized as a woman. So right away, I’ve basically told this vendor “I am a woman and I want sticky rice.” Clearly, I’m a male…so she might start thinking “uh…is this white guy a ladyboy?” Half a second later (or sooner), and because I was dressed as a male, she’d realize that my Thai was terrible, and I’m just hungry. So I’d probably get a laugh, a nod, and walk away with my sticky rice none the wiser.

Infraction 2 isn’t huge. GT just recommended I use the verb “I need” instead of the verb “I want”. Meh. Infraction 3 is interesting for the same reason infraction 1 occurred. Khrap is the male ending (females end their sentences with khaa). While I can understand why GT would leave it off (maybe there is something in their translation algorithm that factors in culture a bit), the presence of khrap or khaa is what makes this sentence polite. It’s roughly the difference between “I want sticky rice,” and “I want sticky rice, with all due respect.” But the gender declaration is still there. Culturally, I’m a guest in her country, and she’s older. Respect for elders is a big deal so I would immediately lose a few more points for not showing her the respect afforded to her by my use of khrap. Well crap.

Until we genuinely grapple with an art form, creative medium, or a language, we tend to separate out the technical aspects from the rest of the environment. In other words, we tend to take for granted the way the culture surrounding a medium changes that medium. Someone that learns storytelling in the US (hero conquers) is likely to craft far different stories than someone that learns storytelling in, say, Japan (hero conquers in honorable death). Even more subtle is the Pinterest/hipster practice of slightly over-exposing photographs. Culture transcends character arcs, plot development, aperture, and shutter speed alike.

Ha..okay so if you’re Thai and reading this…feel free to laugh. I deserve it. I actually order two packages of sticky rice with chicken (one for my wife), and two sticks of barbeque pork. It took me about a week to nail the order. You can see the ‘packages’ in the bag the man is holding in the first photo. ?aw khaawniaw kai soong ho, kap muu phing soong maay, khrap. P̄hm is dropped because I’ve since learned that it’s obvious who is speaking, so the sentence translates to “I would like two packages of chicken sticky rice, and two sticks of barbeque pork.” Respect implied. If you’re like me, and you want to get a real feel for the sentence structure it would be: “I would like sticky rice, chicken, two packages, and barbecue pork, two sticks, please”

So my question is how has culture influenced your art? Let me know in the comments!

Press Enter To Begin Your Search
×